“Painting Over” Barriers to Jewish Camp

As a person committed to social justice and accessibility, I often think about the ways in which we can be more welcoming and inclusive of people with disabilities. As a Rabbi and Jewish communal professional my work tends to focus on what we can do as a Jewish community to live up to these ideals. I recently had a profound and unexpected moment of reflection, however, in a seemingly unlikely place: the parking lot of a Target. I came across the following image, and was so struck by it that I had to stop and take a picture. 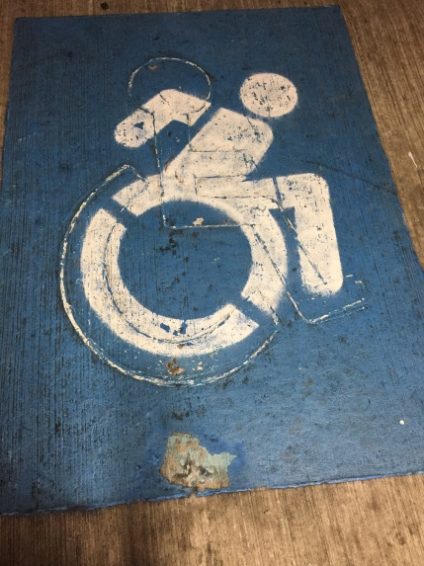 The older image is the current International Symbol of Access, depicting a stick figure sitting passively in a wheel chair. The new image – from the *Accessible Icon Project – also portrays a stick figure in a wheel chair, but so much more as well. We see that the figure’s head is forward, to indicate the forward motion of the person through space. The arm angle is pointing backward to suggest the dynamic mobility of a chair user. Depicting the body in motion indicates that the figure is navigating the world. Even the wheels look like they are moving.

Quite simply: the first image shows us a person sitting in a wheelchair. The second image shows us someone living their life, while using the wheelchair as a tool. The person in the second image has places to go and people to see. The wheelchair (signifying disability) is an important part of the image, but it doesn’t define it – or the human figure in it. The fact that the new image is painted over the old makes it even more powerful – it almost looks as if the figure is actively breaking free from the old image of passivity, refusing to be bound by the preconceived notions of others.

Judaism teaches us that we are all equal regardless of background, faith, gender identity, sexuality, culture, ethnicity, or level of ability. Each of us needs to play an active role in treating each other with dignity, compassion, and love. We know this. It is a cornerstone of our Jewish identity. And yet, when it comes to Jewish people with disabilities, are we doing enough to provide equal access to Jewish communal life? Despite our best intentions, are we sometimes guilty of viewing Jewish people with disabilities as passively adjacent to – but not active members of – our communities? If so, how can we “paint over” this older way of thinking to create more accessible communities in which we can meaningfully engage more Jewish people with disabilities?

In reflecting on these questions, I came to the following question which seems to contain them all: What is my responsibility to my fellow Jew? The Gemara in Sanhedrin has an answer, claiming “Kulan Areivim Zeh B’Zeh– All of Israel are each others guarantors.”(Sanhedrin 27b) To prove this the Gemara cites Leviticus:

They will stumble, each man over his brother as if from before a sword, but there is no pursuer; you will not have the power to withstand your foes (Leviticus 26:37)

I cannot read this without thinking of all of the times that we “stumble” as a community because we are not being “guarantors” of one another by ensuring that Jewish people with disabilities are active participants in Jewish communal life. It is only when we recognize that we all are active divine agents in our community that we can move forward without stumbling, strengthened by everyone’s innate value.

At Foundation for Jewish Camp, we take accessibility and inclusion seriously. The experience of attending Jewish camp is an important milestone for so many young Jewish people, and I’m proud of our consistent efforts to increase accessibility for Jewish campers and staff with disabilities. So many Jewish camps are doing incredible work around inclusivity. And with the recent creation of the Yashar Initiative (generously funded by a $12 million grant from The Harry and Jeanette Weinberg Foundation), we’ll be able to partner with day and overnight camps to further increase accessibility for campers and staff with disabilities, as well as provide essential trainings for staff. We hope this support will significantly increase the number of campers and staff with disabilities who are able to participate in Jewish camp.

We know there’s still much work to be done regarding inclusion at Jewish camp, and we refuse to be passive. We will not stumble. We are committed to actively moving forward, breaking free from the status quo, and doing our part to create a more welcoming and accessible Jewish camp experience. I invite all Jewish communal professionals and institutions to join us in “painting over” any barriers to Jewish communal life. Let’s actively work together to create a more inclusive, diverse, and vibrant Jewish world, Zeh B’Zeh.

*Check out the 99% Invisible Podcast for more information on this topic.

Rabbi Avi Orlow is the Vice President of Innovation and Education at Foundation for Jewish Camp. Before joining FJC in 2008, Avi was the Campus Rabbi and Assistant Director of the St. Louis Hillel at Washington University and has held numerous positions as rabbi, educator, and youth leader. He spent 17 years as a camper and then educator at Ramah Camps in Pennsylvania and Wisconsin and YUSSR camps in the Former Soviet Union. Avi has a B.A. in religious studies from Columbia University. He was ordained in the charter class at Yeshivat Chovevei Torah, the open Orthodox rabbinical school. Avi lives in White Plains with his wife, Cantor Adina Frydman, and their children, Yadid, Yishama, Emunah, and Libi.

The Yashar Initiative, generously funded by The Harry and Jeanette Weinberg Foundation, provides ACA accredited day and overnight camps in the US with essential funding for capital improvements to increase accessibility, as well as professional development, research, and evaluation. Applications for grants are due January 15th, 2019. Click here for more information.