When at camp did you meet?

We went to camp together starting in 2002, but officially met the summer of 2005. Ashley was an OZO (CIT) and Joey was a unit leader. Ashley was a cheerleader and Joey saw her doing some cheer moves outside of the art room. When he found out that she cheered for her high school he asked her to do a skit with him doing a “cheer off” in the camp talent show. He says this was his ploy to get “time with her.”

What did you first think of each other? Was it love at first sight?

Joey thought Ashley was cute but it was an innocent crush and nothing happened at camp. Joey thinks Ashley had a crush on him… so we just keep letting him think that. 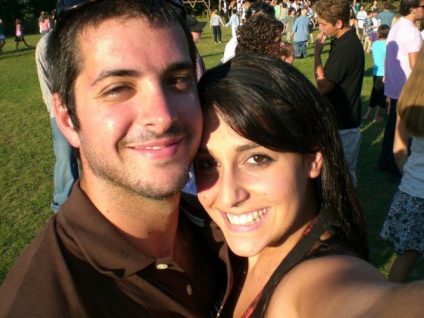 We did not keep in touch after that summer, even though there was a connection from that talent show act. Ashley lived in Los Angeles and Joey in Wisconsin. We reconnected 6 summers later in 2011 when Ashley moved from the west coast to Chicago. Joey had moved to Chicago a couple months before and some mutual camp friends realized we were both in Chicago and hinted that we should meet up. We have been together ever since we reconnected in Chicago.

One of my best girlfriends from camp made a video of us that played at our wedding and featured footage of the camp talent show act. Another one of my best camp friends made a signboard with a painted image of us from the talent show act, and then all of the guests at the wedding who went to camp signed it. And of course, we took a group Camp Interlaken photo.

Of course! Camp is what brought us together. We still maintain so many special relationships from camp. This summer we had an opportunity to talk to the campers as alumni and share our story. I am pregnant and we have a feeling that this is a future Camp Interlaken Camper so the tradition will live on.