We met at Camp Interlaken JCC when we were 14 years old. Evan was reading The Tao of Pooh behind his tent, and Jessie asked him about the book.

What did you first notice about each other? Was it love at first sight?

We didn’t really travel in the same circles because Evan was very shy and Jessie wasn’t. Because of that, we never really talked again at camp. 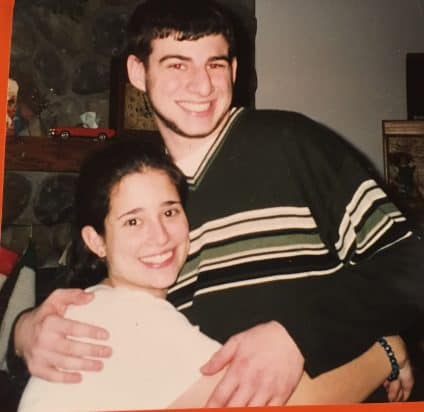 Our paths continued to cross, despite not talking at camp. When we were 16, we were both in Israel on different group trips. Our groups ran into each other twice, and while we both remember that happening, we don’t remember seeing each other. Then two weeks before college, Jessie went to get a computer from Best Buy. Evan was the salesman and he recognized Jessie from camp. It turns out, we were both going to the University of Minnesota and living in the same dorm. Jessie remembers telling her mom that a, “cute Jewish boy,” was going to live right near her in the dorms!

Our camp life has definitely influenced our marriage and family. After we got married, we moved back to Milwaukee to be closer to family and our Jewish community. Jessie is a special needs counselor in the summers at the JCC Rainbow Day Camp, and some of our close friends were campers with us at Interlaken. Our kids’ favorite bedtime stories are those from our time at Camp Interlaken.

Will you send your children to camp?

We now have two children who have gone to the JCC Rainbow Day Camp every summer since they were old enough. Last summer, our oldest, Judah, spent three nights at Camp Interlaken as part of the Rainbow Day Camp program. As we expected, he was instantly smitten and will go for two weeks this summer. His younger sister, Gabby, has already talked about what it will be like when she is there, too!