We were at camp together in 1976. Judy was a first year camper in Anaf (the oldest unit at camp), Ian was a song leader and Judy’s brother’s cabin counselor, but our first actual face to face meeting was a couple of years later when Ian asked Judy where his crush and her co-counselor was. We remember working together for the first time when Ian was looking for help in silk-screening t-shirts for Anaf Project.

How did you first notice each other?

In the summer of 1996 Judy was divorced with two kids and back at camp as the administrator. Ian happened to be in Indiana as part of a road trip through the mid-west and decided he wanted to stop by camp to visit with Camp Director Rabbi Ron Klotz, who he thought would be the only person he would know. He stepped into the camp office, saw Judy and said “Hey – I know you.” Judy responded with “Ian Silver?”. Ian ended up staying at camp longer than intended and much flirting ensued.

How did you finally end up together? 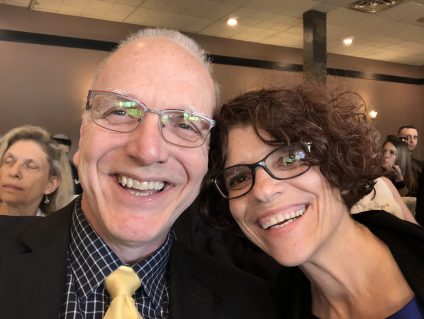 By the end of that re-meeting in 1996, Ian made plans to visit Judy while he was in Toronto for the Toronto Film Festival. We kept in touch and started visiting each other in our respective cities, Toronto and Minneapolis. We had ups and downs but by the year 2000, Ian proposed and we got married the summer of that same year.

We called Ron Klotz to ask him to officiate at our wedding and Ron asked us if we would like to get married at camp, which is what we did! We invited our friends and told them to bring their kids because that’s what camp is all about. Our wedding weekend started with a Shabbat walk, our Auf Ruf (pre-wedding weekend) in the Beit T’fillah (house of prayer), a barbecue dinner, Israeli dancing and a song session around a camp fire with four former song-leaders from GUCI. The weekend pre-wedding festivities ended with Ron telling one of his favorite campfire stories. Shabbat was also filled with camp fun- arts and crafts, swimming, and of course an Americans vs Canadians baseball game. The evening was toasts and roasts in the decorated chadar ohel (dining hall). Our wedding ceremony was held in the Beit T’fillah with all our celebrations and fun under a huge tent set up on the athletic field. It was a beautiful sunny Indiana summer day and a true taste of what camp is all about.

Do you find that your time at camp has influenced your family? How so?

Our experience at camp, both as individuals and as a couplem gave us a common ground of understanding the importance of Reform Judaism in our lives. All three of our kids have gone to Union Camps, we are active in our synagogue where Ian regularly leads music on the bima (podium), and Judy has gone on to be an educator in URJ temples. We continued to support URJ camping through work on faculty, attending reunions and supporting financially.

You mentioned all your children went to camp?

All three of our kids have gone to camp. Our two older kids started at camp as “staff brats” and went on to be campers, Avodahnikim, counselors and specialists. Our youngest son (16) started attending URJ camps as a faculty kid, camper and is starting his first year as a CIT at Camp George.