We met at Camp Chi in 2000. Todd was 18 and going off to the University of Illinois that fall. Lauren was 17 and starting her senior year in high school. We happen to have grown up in the same town (Northbrook), attended the same high school and even the same synagogue but never knew each other. In the summer of 2000 we both ended up back at Chi (we’d both been there as campers for most of our lives – again, never meeting), and were counselors in the same unit. We met during the first week of camp and were put together to plan a scavenger hunt activity. 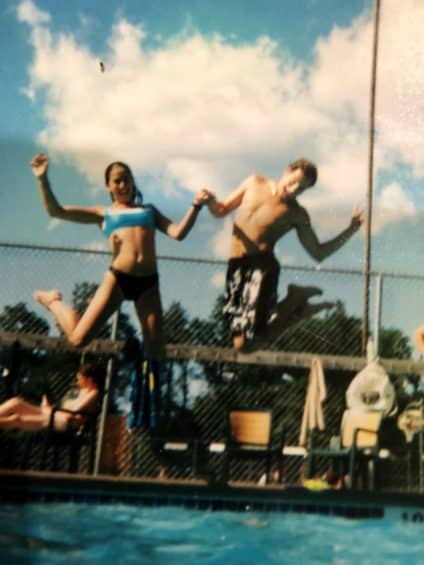 Yes, we instantly hit it off that night and started “dating” a few weeks into the first session. It was honestly love at first sight for both of us – we never looked back.

Todd went off to school and we did the long-distance thing that whole year, and then for the next 4 years when Lauren went to school at Indiana University (often driving 2.5 hours in the middle of the night so we could see each other). During Lauren’s junior year, we decided to study abroad together in Amsterdam, and this experience really deepened our relationship. After college we both moved back to our parents’ homes for a year and then moved into our first apartment in the city. We married on August 9, 2009 and now live in Deerfield with our 2 sons, Benjamin (5) and Ezra (2).

Did you have any camp themed thing at your wedding?

No – but we strongly considered having the wedding at camp. We did get engaged at camp in 2008 (when we were visiting).

Yes, it has always been a big part of our lives and we reflect on that time with nostalgia. We definitely plan to send our kids to Jewish overnight camp and feel strongly that it has influenced our lives in a very positive way.

Absolutely! We joke that we need to create a camp account for each of them now to make sure they can go.