This is not your typical “we met when we were sabras” kind of story. We are both Jewish educators and serve as rabbis/educators (we call the role “Camp Faculty”) each summer. While we both worked in Jewish education, we hadn’t met until the summer we were both serving as faculty during the same two weeks of the summer! As a group of 5-6 rabbis/educators/cantors, we worked on lesson plans together, worked on T’filah together, you name it! Melissa was also there as a single mom (divorced), so her children (now our children) were getting to know Mike as a camp leader before we started dating. It became clear that we had the same values and the same passion for Jewish education — and most especially Jewish camp. We knew we wanted to be on the same team! 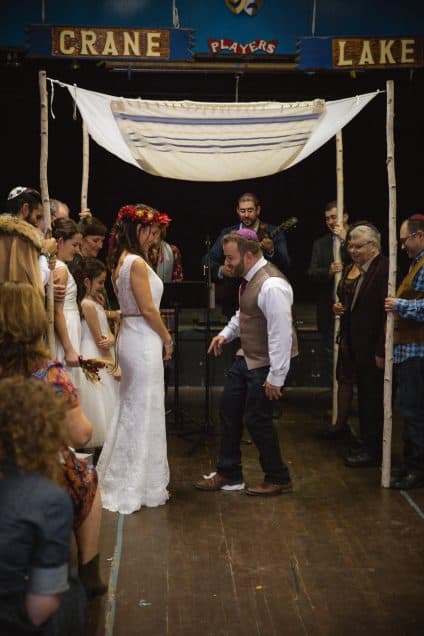 Was it love at first sight?

Definitely – there was a spark that could not be denied. But because of our roles, we were careful to move slowly and wait until camp was over!

We were both sad that we were not going to see each other every day all day long, so we looked for excuses to see each other. A march for the state of Israel seemed like a good enough excuse for two educators to get together! After the march, we looked for other conferences to attend so that we could “coincidentally” be in the same room together. It was after one of those marches that Mike asked Melissa on a date. The rest is history!

Of course! We had our wedding AT camp! We were married at the place where our story began — Crane Lake!

How has camp influenced your relationship and family life?

Camp is a huge part of our life. We have since had a child together, and her room is decorated with llamas (because camp had llamas the summer we met) and we sing Shema (the camp version) before bed — all together as one big blended family. We all still spend summers at camp — the list goes on and on!

Do you send your kids to camp?

One just finished her Olim (last year as a camper) summer but we know she will be back in the future, one still attends, and Nessa (the baby) will attend again with us this summer (her first summer was 3 months after she was born!) and she starts Eisner Day Camp this summer. Camp will always be a huge part of our lives and our narrative!