What did you first think of/notice about each other? Was it love at first sight?

Robin showed up at the camp office before the summer to sign her lifeguard contract, where Ron happened to be at the time in his role as Camp Administrator. As Robin left, she told Ronnie it was a pleasure to meet him. He replied, “the pleasure was all yours.” Robin left, called Sally, and refused to go to camp. Thankfully, however, Robin did end up going to camp! 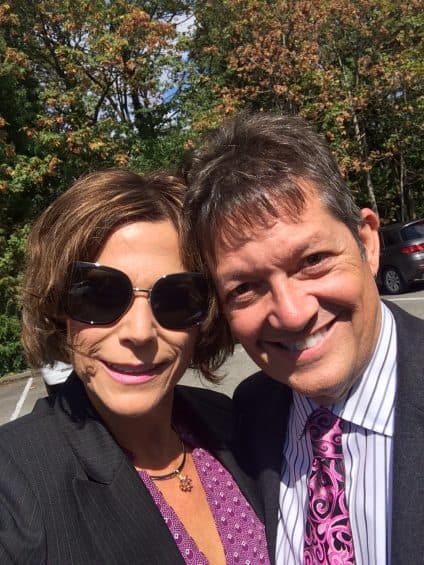 Camp was awesome! Robin was the lifeguard and loved teaching swimming and certifying counselors as lifeguards. She didn’t like cleaning the pool, however, so Ronnie cleaned it for her every day! The relationship bloomed and Ronnie and Robin took days off together – Robin even said “I love you” within a few weeks! A few weeks at camp, as any camp alum knows, is like a few years in the real world!

Our Camp Rabbi and lifelong friend came to California to marry us.

We have camp in our blood! Some of our best friends to this day were at camp with us. When we put our own children on the bus to go to Camp in California we had to hold ourselves back as we wanted to go with them!

If you have kids or are planning to have kids, will you send them to camp?

Our kids went to Wilshire Boulevard Temple Camps in Malibu, CA. They were Campers, Staff, and Song leaders!