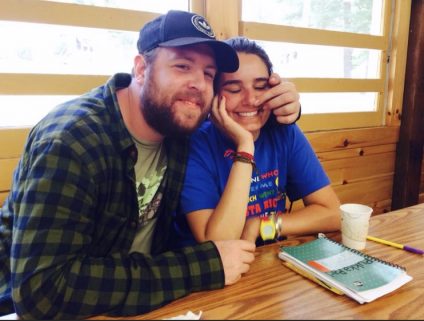 We met at Camp Laurelwood in Madison, CT in 2010. Tess was a general bunk counselor and Amir was a division leader. It was Tess’ second summer at Camp Laurelwood and Amir’s fifth. We have different versions of how we met. Amir believes that we first met during ice breaker orientation games. Tess has no clue when we met but is sure the moment was magical and full of rainbows and unicorns!

What did you first notice about each other?

When Amir first laid eyes on Tess, he thought she was a cutie. After he got to interact with her more that day, he was enamored with her intelligence and humor. Tess was immediately drawn to Amir’s playful personality. The fact that he was Jewish, tall, smart, and had a beautiful beard didn’t hurt.

When camp ended that summer, Tess went back to school in Worcester, Massachusetts and Amir returned to graduate school in Northampton, Massachusetts. We messaged each other every day and would spend weekends together exploring MA, going to concerts, and eating delicious food. We built a strong friendship over the next few years, both during camp and after. In 2013, while Amir was visiting Tess at college, we exchanged our first “I love you” and the rest was history!

Camp was definitely a major part of our wedding — and everything leading up to it! In 2017, Amir proposed to Tess during a perfectly planned visit to camp. Tess was shocked! Amir had spoken with the camp director and planned out the whole day. It was such a special moment to get engaged at the place we first met and both loved so much. Amir even arranged to have another camp friend secretly photograph the engagement so we’d have photos of that special day. The same camp friend was our official wedding photographer in 2018. Our camp friends from all over the world came to celebrate our special day!

Absolutely. We feel that meeting at camp — a place where you can be your true self — helped us build a solid foundation as friends before becoming “official.” We definitely entered our relationship feeling comfortable with each other on a deep level. Let’s be real, camp friends see you at your best and worst! Amir also felt comfortable meeting and spending time with Tess’ family, as Tess’ sister and cousins also attended Camp Laurelwood while Amir was a staff member. Spending summer after summer at a Jewish camp also solidified to us that we share similar Jewish values. We’re now looking to grow a family rooted in these values and traditions.

Will you send your future kids to camp?