A “Just For The Summer” Romance

Twenty years ago, in 2002, we met at Camp Ramah in the Poconos. Kelly Clarkson became the first American Idol winner, introducing, “A Moment Like This” into our lives. A Walk to Remember, Catch me if you Can, and My Big Fat Greek Wedding were popular movies. And everyone loved playing “snake” on their Nokia cell phones.

Stacy had just graduated from high school and was headed to Muhlenberg College that fall. Before college, she was excited to head back to Ramah, her home away from home, to be on staff at the same place where she had spent almost every summer since she was ten.

Matt had just completed his freshman year at the University of Maryland and was returning staff. Though he didn’t grow up at Ramah, many of his cousins were there and camp was becoming part of his story.

Little did they know that this summer at Ramah would change the trajectory of their lives.

Camp is a special place. Hours feel like days and days feel like weeks. The time spent there is magical. You are unplugged from the hustle bustle of daily life, surrounded by picturesque scenery and integrated into a beautiful community full of fun, energy and spirit. 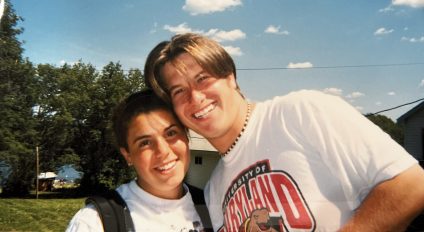 When we met, we thought we would date ‘just for the summer’ and go our separate ways… and we almost did! We officially ‘broke up’ as Stacy headed off to school. But somehow, our hearts knew there was more to this relationship. Shortly after arriving back at school, we decided to give long distance dating a try. We dated through college and got engaged right after.

Ramah not only set the stage for us to meet, but it also continues to influence our observance and love for Judaism. We got married in 2007 and knew we wanted to have a family. Our goal was (and still is!) to raise our kids in a Jewish home filled with the same energy and excitement for Judaism that Ramah instilled in us. 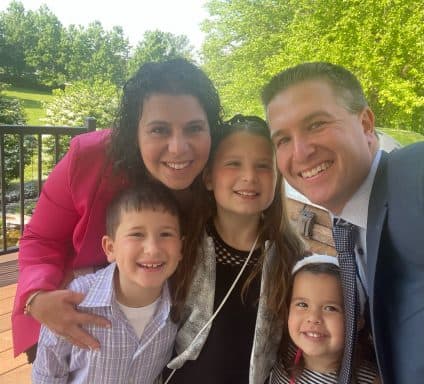 Our oldest daughter was born in 2013. Last summer she told us, “I’m ready for Ramah!” At the start of the summer, we packed her bags and sent her off to create her own experiences. There were tears as her bus drove away but those tears quickly turned into smiles as real experiences replaced her (and our!) imagination! Watching her love camp in her own way has been one of the best parts of parenthood. Watching her live independently for four weeks, growing as an individual, is incredible! The icing on the cake were the tears that flowed upon her return home. Yes, she was thrilled to be home and happy to be with her family but even more so, she missed her new home away from home. She declared herself “camp sick!” She is already counting down the days until next summer and her siblings can’t wait to join her in a few years.

If someone would have told us back in 2002 that our ‘just for the summer’ relationship would lead to a life together and that our children would follow in our footsteps at Ramah 20 years later, we would have laughed. Our story shows the power of camp!